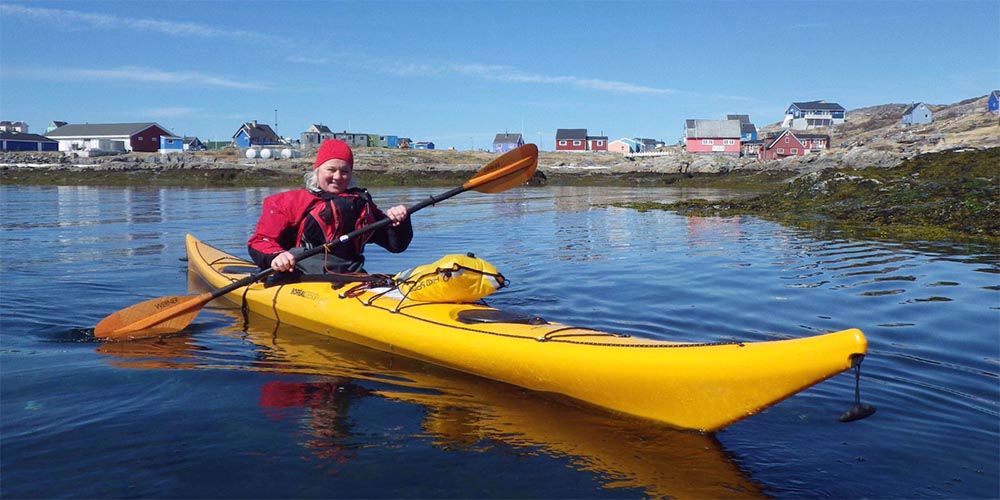 There were a few fields of bright green grass in the small villages we visited. This grass was almost sacred to the farmers, as they depended on it to feed their sheep. But aside from those few fields, the Greenland I saw was snow, ice, and glaciers. It is believed that Eric the Red, the famed Norse Viking, was the first European to discover the island. He knew he would have to convince his fellow countrymen that they could farm on the new island if he was going to persuade them to relocate; hence, he gave it the compelling name of Greenland.

With my face pressed up to the small window of row 14A I started to understand why our group had decided to travel to southern Greenland. The huge expanse of untouched wind-swept snow seemed to go on forever. The endless glaciers oozed blue green water, creating fjords like long fingers. Those fjords were dotted with hundreds of icebergs. Some resembled gems, while others were shaped like animals. All of them were shifting, crashing, rolling, and slowly melting.

The sights and sounds of Greenland will have you shivering in awe.

The single runway with an approach straight into the iceberg-filled Atlantic came into view and our adventure began within minutes of landing. We had arrived at the tiny airport in Narsarsuaq, which has one door in and one door out and no one even asked to see our passports.  We met our local guide and 20 minutes after deplaning we were donning heavy red winter parkas and boarding a zodiac for a two-hour ride through the fjords. We were headed to Qaleraliq Camp, our campsite for the next two nights. It was June, so the sun never completely set and the evening colors against the glacier and icebergs were amazing. A muted pink and purple show danced across the water. 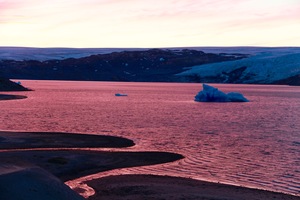 The next day’s adventure began with the sound of the motor from the returning zodiac. We climbed aboard, and our driver and glacier guide whisked us off to explore a near-by glacier. With crampons on and ice axes in hand we spent the day exploring the varied surfaces of the glacier. We were surrounded by the burble of water, the crunch of ice underfoot, and the occasional boom as part of the glacier caved. The color of the glacier ranged from brilliant white to deep blue to dirty gray. The texture was unforgiving; if you tripped, sharp ice shards were waiting to leave their mark. 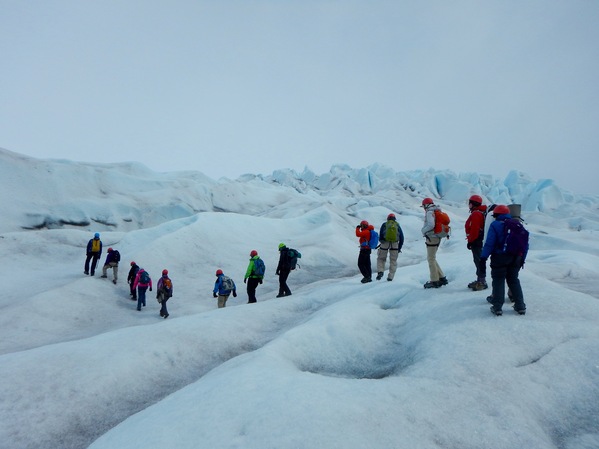 Before returning to camp the zodiac brought us to the edge of the massive glacier where seagulls flew by the hundreds from berg to berg. We watched in awe as parts of the glacier crashed into the sea. About 80 percent of the island is covered by the Greenland ice sheet, and we had just seen witnessed a tiny fraction.

In Greenland, the weather controls how you spend your day. We were told we would have to leave camp at the end of the day for fear that, due to high winds, the zodiac would not be able to navigate through the fjords. The day brought rain but with proper gear and a desire to do some hiking we set out to get to the highest point from glacier camp. We hiked over tundra, enjoyed a variety of wildflowers, and even saw some caribou. The view was socked in by the rain and fog but the effort of the climb was worth each step. Back at camp, we packed up and boarded the zodiac for the hour-long ride to the village of Narsaq, where we spent one night. Hot showers and cold beers were the highlight.

An early morning walk revealed quaint houses painted in bright blues, reds, greens, and yellows. Families were walking kids to school, leaving for work, or heading off to the small market. After breakfast we boarded the zodiac and headed to Itileq, where we enjoyed a day of hiking along a route called the “Path of the Kings.”

Itilleq is a small Inuit settlement where one can see the ruins of Gardar, the archdiocese of Viking Greenland.  This site was recently added to the Unesco World Heritage List. From there we motored to the town of Qassiarsuk, home of Eric the Red. Leif Erickson, son of Eric, later brought more Vikings to farm and live on Greenland, after the death of his father.

June 21, the summer solstice, is the holiday Greenland Day, and it was finally time to go kayaking. We hiked through fields and grasslands and by mountain lakes to arrive in Tasiusaq. After summiting a small hill, our first glimpse was a view down into Sermilik fjord, which was literally full of icebergs from the Eqaloruutsit glacier. At the water’s edge it quickly became evident that we would not be able to kayak to our intended destination – there were too many icebergs. 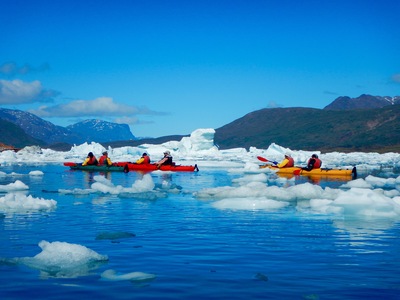 Plan B was to set up base camp on the shore then enjoy some exploratory paddling. Paddling in the fjord, I learned the truth behind the saying, “It’s only the tip of the iceberg.” When you paddle up close to one of those bergs you can look down through the clear cold water and see that what’s below the surface is so much bigger than what’s visible above. We spent a few hours navigating and paddling through the maze of icebergs. Evening passed as we sat by the shore watching the icebergs shift, roll, drip, and calve as the sun slowly faded.

Our last full day we hiked the Flower Valley. The hike brought us to an amazing overlook of the Kiattut glacier, with an endless panoramic view of the Polar Ice Cap. On our last zodiac boat ride our driver brought us to the base of another massive glacier. Water, ice, mountains, and blue sky surrounded us. With glacier ice in our cups we gave a toast to Greenland and the epic adventure we had just experienced. The driver started the engine and with a sly grin he gunned it and took us on a wild ride around several huge icebergs.

Back at the dock we unloaded our gear, took off our big red parkas, and parted from our Greenland guides. We walked the quarter mile to the small airport feeling both blessed to be there and sad to be leaving.

Anne Brewer recently returned from guiding the Hiking and Kayaking in Greenland trip with Adventures in Good Company. This article was originally published in LOCALadk, a magazine where Brewer serves as editor and contributor.

Anne Brewer is the editor of LOCALadk, a magazine all about inspiring people; to climb, to ski, to ride, to think, to create, and to explore the Adirondack Mountains.